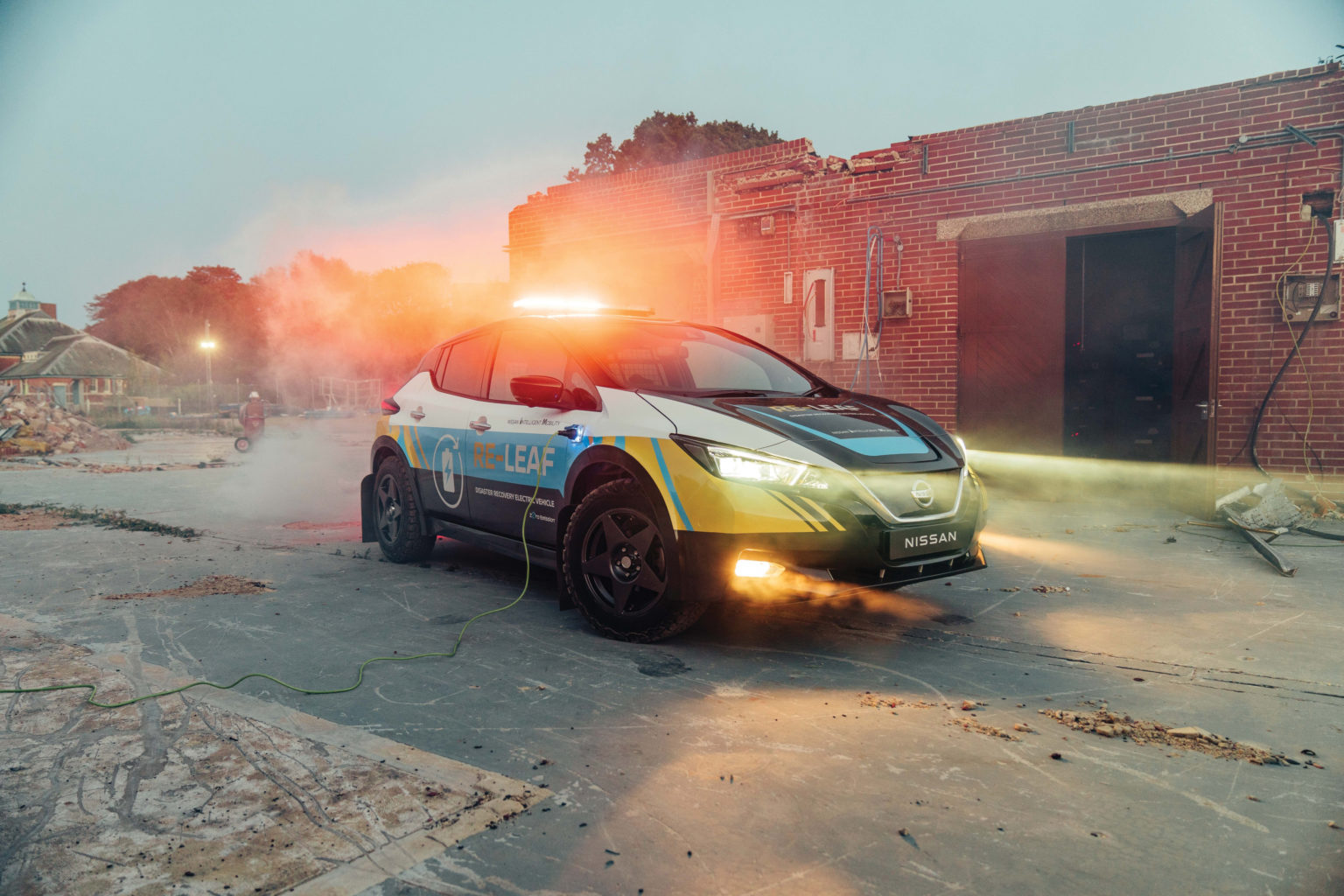 Natural disasters are on the rise globally, and when they strike, power outages often follow, hampering rescue efforts and plunging residents into disarray. A 2019 report from the World Bank found that natural shocks and climate change caused around 37 per cent of the power cuts in Europe from 2007 to 2017 and 44 per cent in the USA, with power not usually restored for between 24 to 48 hours.

So a rather handy tool in the aftermath of a disaster could be a versatile, mobile electricity supply, rather like a giant power bank on wheels, that can get vital power exactly where it’s needed. In fact, something exactly like the Nissan Re-Leaf concept, a demonstration vehicle that’s capable of dashing into disaster zones and powering medical, communications, lighting and other vital emergency apparatus.

And it’s not just a flight of fantasy. In Japan, Nissan’s home nation, the Leaf has already been used to provide emergency power and transportation during natural disasters since 2011, leading the company to form more than 60 partnerships with local governments to aid disaster relief efforts. In 2019 alone, there were more than 2,000 earthquakes recorded in Japan, and during Typhoon Faxai in September 2019, Leafs were sent to community centres after 340,000 households were left without power. They were used to power fans, refrigerators, freezers, lighting and to put extra charge into smartphones.

Thanks to its 62kWh lithium-ion battery pack that comes with ‘bi-directional’ charging as standard, the Leaf can both take power during charging and ‘push’ power back into the supply using Vehicle-to-Grid (V2G) technology. According to Nissan, the Re-Leaf is capable of powering an electric jack hammer for a couple of days, a pressure ventilation fan for almost three days and an intensive care medical ventilator or 100-watt LED flood light for over two weeks. Acting as a portable home power station, a Nissan Leaf could power the household of the average UK homeowner for approximately six days.

Of course, the Re-Leaf in these pictures isn’t just a normal Leaf, following modifications to support the three ‘R’s’ of disaster preparedness – ‘providing an emergency response’, ‘aiding the humanitarian recovery’ and ‘improving community resilience for the future.’ Its amber paint scheme is a nod to the ancient Greek word for amber – ‘electron’ – which is where the word ‘electricity’ originates. This contrasts with flashes of blue to represent Nissan’s Intelligent Mobility brand’s trademark colour, while a roof-mounted LED light bar also flashes amber to warn other vehicles and emergency workers that the Re-Leaf is approaching, with help on its way.

By their very nature, disaster zones are often strewn with debris, obstructions and buckled tarmac, so the Re-Leaf’s ride height has been raised to 225mm (an increase of 70mm) and features a custom sump guard to protect the car’s floor. The tracks have also been widened by 90mm at the front and 130mm at the rear, with custom wheel arches, and mud flaps to ensure 17-inch uprated Compomotive motorsport wheels and BF Goodrich Baja off-road tyres can fit within them.

The rear seats have been stripped out and the boot turned into a flat loading bay for equipment, while a desk and 32-inch LED screen can pull-out once on scene to provide a mobile operational hub. The battery pack itself can provide 230-volt power from three sockets – two weatherproof external connectors and an internal domestic socket mounted in the boot.

Dan Cooke, Operations Director at Serve On, the UK’s leading organisation providing an emergency search and rescue function when natural disasters strike around the world, said: “Seeing the Re-Leaf is really exciting, because we love exploring new ideas to see what’s possible. Looking back to previous scenarios we’ve dealt with, this technology could have made a real difference. For example, being able to power multiple filtration devices to produce thousands of litres of drinking water is ideal.”