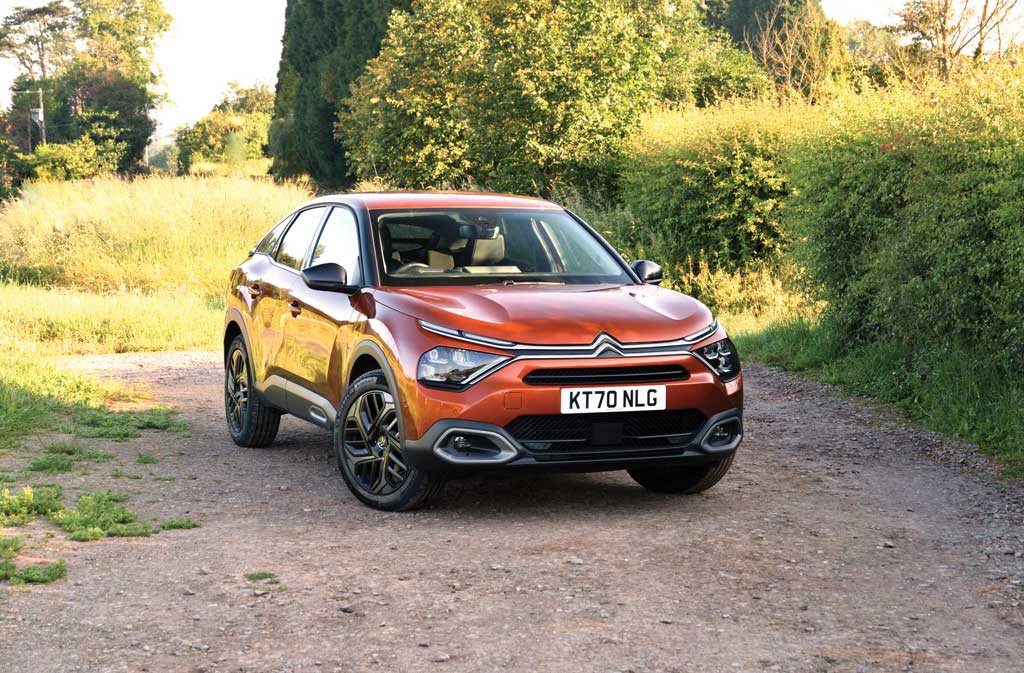 Citroën is aiming high with its new C4. From the obvious move upmarket from the previous C4 Cactus, to the new car’s elevated SUV-like stance, this iteration is as far away from its quirky design past as it could be. Its maker has also fully embraced the new era of motoring, as buyers can choose from petrol, diesel, and electric variants.

I’m sticking with diesel, with Citroën’s flagship 129bhp 1.5-litre engine powering this top-of-the-range Shine Plus model. This combination also includes a standard-fit eight-speed automatic gearbox, complete with a gear selector reminiscent of the stubby lever you’ll find in numerous Volkswagen Group cars. The upshot is Citroën relieving you of £28,255 for a car riding on 18-inch alloy wheels. Thankfully the Shine Plus trim is pleasingly generous for that total, and includes such highlights as an upgraded audio system, leather seats, premium cabin trim materials, camera-based driver assistance aids, plus other kit from the lower grade models such as adaptive cruise control, keyless entry and ignition and auto high beam headlights. A heated steering wheel, a bracket to hold an iPad, and the fetching ‘Caramel Brown’ metallic paint bumps my C4 up to £28,950.

Gratis on all cars is Citroën’s trademark ‘Progressive Hydraulic Cushions’ suspension technology to help smooth out road imperfections, plus its ‘Advanced Comfort’ seats boasting more support than your average chair. As I previously ran a C4 Cactus, I’m interested to see how Citroën’s comfort-focused technology has evolved in the intervening years.

I quite enjoyed my time with that C4 Cactus, although it wasn’t devoid of quirks. This C4 couldn’t be a more different proposition. It’s competing head-on with the mainstream offerings from Ford, Vauxhall, Volkswagen, Renault et al by virtue of its size, layout and price, but thanks to its elevated stance it’s also muscling in on the growing compact SUV market. Someone in Citroën’s design office was clearly influenced by Toyota’s C-HR – just look at the C4’s rear if you don’t believe me. Oh, and while you’re there you’ll notice the absence of a rear wiper. Let’s hope the experience is better than my memories of Honda’s 2005 Civic.

Thankfully the view forward from inside the cabin isn’t as controversial. There’s a lot of lightly textured plastic in this C4, with the gloss black centre console providing some contrast. The overall look leans towards minimalism, although (rejoice!) there are proper heater controls underneath the large infotainment screen.

Once you’ve let the keyless entry system do its thing, first impressions from behind the steering wheel are promising. The diesel motor is quiet, and the gear selector proves intuitive, if a little on the small side. I would’ve liked to have seen a column stalk shifter like Citroën’s old C4 Picasso Sensodrive system. That way the entire centre console could’ve been used for storage. There’s no shortage of thrust from the engine, though, and the brakes are reassuringly progressive. The trick suspension copes well with urban roads, although the trade-off is a little roll in the corners, while the slightly remote steering harks back to an era when you just pointed a Citroën at a corner, and it encouraged you to trust it.

The only gripe so far, if you ignore the lack of a rear wiper, is the Grand Canyon that is the dual cup holder. It’s so deep that fast food coffee cups rest on their lids, while my favourite thermal mug doesn’t fit in the space provided in the front door pocket. My water bottle will, though. I’m sure I’ll live, but I hope it’ll be the first and last thing to jolt me out of an otherwise serene and civilised experience.

Citroën’s implementation of keyless entry and ignition is proving to be a seamless and impressive experience.

Someone at Citroën doesn’t like fast food coffee cups, as they don’t fit properly in the C4’s cupholders.